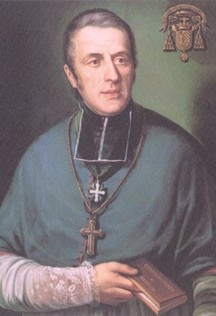 Saint Eugene de Mazenod was  born    in 1782 in Aix-en-Provence,  France, on    the verge of the French  Revolution.   His   father was of the  nobility, his   mother   from a rich  family. At age   eight, the   young  Eugene had to flee   in exile   because  the revolutionaries wanted to   kill  the children of the nobles. His exile  lasted for eleven years. In Venice he was taken in by an exemplary family, the Zinelli's. "It was there that I  discovered my vocation to the priesthood." In Palermo, at the  court, he had his share of worldly riches. He wanted to restore the family fortunes by marrying a young rich woman. But he increasingly lost his taste for worldly pleasures.

It was on Good Friday, 1807, at the age of twenty-five, that Eugene encountered Christ and recognized him as his Saviour. "My soul aspired for its ultimate end, God, the unique Good the loss of whom I keenly felt." At the age of twenty-six, Eugene entered the seminary at Saint-Sulpice in Paris. His aim was clear: "to be a servant and priest of the poor." He was ordained a priest in 1811. The bishop asked himself what he was going to do with such a strong-minded and impetuous young aristocrat. He was relieved when de Mazenod asked him to let him work with the poor and abandoned. He also worked with prisoners and preached in rural areas in the common language of the people. In 1815, he felt the need to have companions who would share his apostolate, who would live in community with him, and who would commit themselves through religious vows. On January 25, 1816, Father de Mazenod and four other confreres consecrated their lives to God and went on to carry the Good News to the poor. In 1826, the Society took the name of the Missionary Oblates of Mary Immaculate.

Eugene de Mazenod became bishop of   Marseilles, France in 1837 and his influence extended not only locally but throughout the world. At the time of his death in 1861, his religious congregation numbered 417 members. On Mission Sunday, October 19, 1975, Eugene de Mazenod was beatified by Paul VI.

On December 3, 1995, he was canonized by John Paul II and so is now a man of holiness recognized by the entire church. Saint Eugene de Mazenod was a witness in his times. Eugene, our founder, was an eloquent, principled, relentless, impulsive, generous, intuitive, and sensible man ahead of his times. On his death bed, he left to his Oblates throughout the world a humble spiritual testimony in these words: "Practice among yourselves charity, charity, charity, and zeal for the salvation of souls beyond